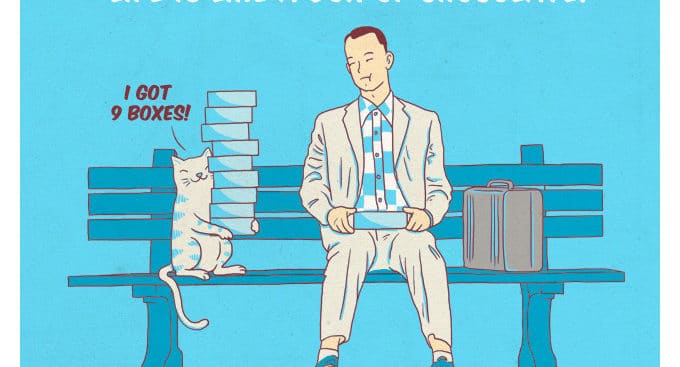 All the English language gurus say that watching films in English is a great way to improve your English, right? I agree with the “gurus” but not ALL films are a good use of your time and energy. In fact, there are some films that are much better than others.

One of my favorites is Forrest Gump, with Tom Hanks. My number one reason for choosing this film is Forrest Gump’s style of speech. He speaks very slowly and uses basic vocabulary that almost everyone will understand. And in addition, other characters in the film speak in the same way when they are speaking to Forrest, due to his slower mental abilities.

However, this style of speech doesn’t make the film boring. It just adds to the character and charm of the film and pulls you into Forrest Gump’s world.

There is another element that I love abou Even though it doesn’t have a clear plot or story line, the film takes you on a tour of modern American history, through Forrest’s eyes. In the film, Forrest experiences some of the major events of the 20 th century, first hand*, including the Viet Nam War and the Civil Rights movement. The film even shows several original news reel clips of these times, but with Forrest Gump now in the middle of the scene, thanks to special effects.

On the other hand, Forrest Gump is a long film – 2 hours and 22 minutes. However, that doesn’t cause my students to lose interest. We usually watch it in two or three segments, which gives us time for discussion and a popcorn break or two!

Sometimes films are like a box of chocolates. You never know what you’re gonna get. But in the case of Forrest Gump, there is nothing to worry about!

*to be there at the time of an event, to see it and experience it yourself